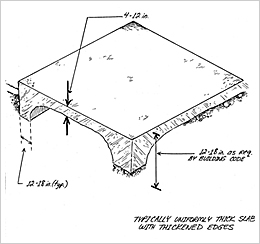 Shallow foundations are susceptible to seasonal movement from rainfall, drought, freeze/thaw cycles, and temperature changes and transpiration of moisture thru the roots of large plants and trees. 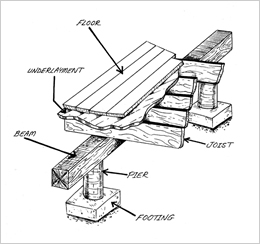 Basements are most often constructed in northern climates where freeze/thaw conditions occur and the footing depth must extend beneath the frost line—often four or more feet below the surface. In many of these cases, builders will go ahead and excavate for a basement and build basement walls that provide the support for the house. The bottom of the basement is typically below the depth over which the majority of the soil’s shrink or swell due to climate occurs. Basements can suffer basement floor heave and lateral wall movement, however.

Deep foundations reach depths that are not normally affected by seasonal environmental changes and are considered to be out of the zone of influence.

There are a multitude of other types of both shallow and deep foundations.

Copyright © 2010-2015 Foundation Repair Network. All Rights Reserved.
Reproduction in whole or in part without permission is prohibited.