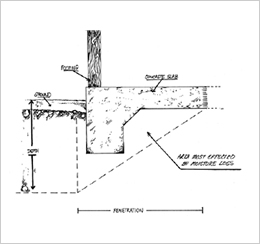 In dry periods the soil adjacent to the foundation should be watered to maintain constant moisture. Proper watering is critical as the purpose is to keep the soil water content next to and under the foundation at approximately the same moisture content.

The use of a soaker hose is most often the best solution and the soaker hose should be used 24" to 36" from the house. A representative at Ram Jack Distribution, a foundation repair product distributor in Ada, Oklahoma notes that in many cases homeowners have waited too long before watering and cracks have already occurred in the soil. In many cases starting a watering program at this time is too late.

July, August, and September is when cracks in the soil often appear. You want to have initiated a watering program long before this so the cracks do not appear.

Some of the other maintenance issues: 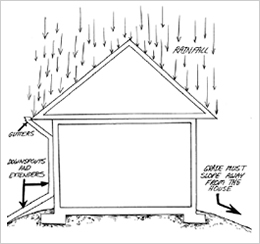 Vegetation- Understand the types of trees you have planted near your home. Certain trees have extensive shallow root systems that remove water from the soil. The Department of Housing and Urban Development suggests trees be planted no closer than their ultimate height. Plants with large, shallow root systems can grow under a shallow foundation and, as the roots grow in diameter, produce an upheaval in the foundation beam. 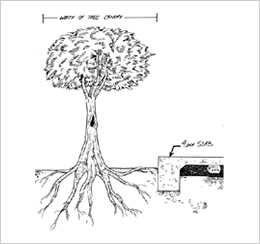 Observation- As Tom Witherspoon notes in Residential Foundation Performance, during times of excessive moisture changes you must inspect your foundation and note movement signs that signal a problem. See Identifying a Foundation Problem. Don’t let early warning signs go unnoticed. Call an expert and find out if you have a problem that should be corrected. Not all problems are disastrous. They may only be a signal of something that can be corrected with increased watering or root barriers at a tree. Acting early can save you money.

Copyright © 2010-2015 Foundation Repair Network. All Rights Reserved.
Reproduction in whole or in part without permission is prohibited.